Okay, maybe this month’s adventure was a little crazy for me, but I 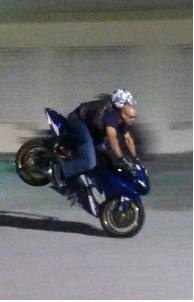 have to say, it was worth it! It’s amazing how my comfort zone is expanding with each month’s adventure.  When my friend Diane asked if I wanted to go on ‘one of my adventures’ I said, “Sure,” without even asking what it was. What was it? Stunt bike riding!  Yes, I got on the back of a motorcycle with a complete stranger. All I knew about him was that he was a professional stuntman. My only direction was, “Hold on tight!”  So I did, as he popped wheelies front and back.

Now, as I’ve said before, an adventure doesn’t have to be life threatening (which most people after seeing my stunt bike video think it was), simply comfort zone expanding. While this was my craziest adventure yet, and yes, perhaps the riskiest, the main thing I noticed, was my mindset change. When after my friend Diane went for her ride and Tony Perez (the stuntman) asked me if I was next, without hesitation, I gave an excited and committed YES! Not one fearful thought, not one catastrophic projection, not even a seed of doubt. I feel the change and I’m excited about it!

The rules have changed for me. Maybe it’s time for you to make your own rules. Let today’s article help you do it.

BIKER BOYZ Make Your Own Rules
By Jessica Sitomer

Derek Luke plays Kid in “a world fueled by power” where “it’s survival of the fastest.” When Kid and his crew find themselves frustrated by the racing club world, it is suggested by one crew member that they start their our own club. Kid embraces the idea, declaring, “Biker Boyz, we set our own rules!” They took it seriously by setting goals and being a support system for each other.

In the fast world of Hollywood where power has it’s own metaphor, the rules aren’t much different than the fuel injected world of bike racing. Creating your own “club” aka team, and making your own rules is both empowering and beneficial.

Here are some tips for creating a successful “business team”:

1.    Determine your goals for the team. The reason you do this before choosing all of your team members is so you know you’re selecting people with the same needs and commitment. Your goals may be: partner call support, team emails, sharing referrals, networking event partners, accountability, etc.

2.    Invite people you know or who know people you know. Because you’re seeking a similar level of commitment it can be tricky in the beginning to sort through strangers who like the idea. Instead, inspire people you know to join you or refer people who they think would value the opportunity to take part in a business team.

3.    Meet regularly. Groups tend to fall apart when there isn’t at least monthly contact. Within the group meeting, put in a system for weekly or daily accountability.

4.    Spice it up. Have a theme for a discussion at your meeting, plan networking outings, engage in brainstorming sessions, whatever it takes to get your team to the next level and maintain motivation.

5.    Have team members share successes and be acknowledged for them. Creating a safe environment where jealousy and envy are not welcome, helps everyone recognize their growth and their achievements.

Stop working in a vacuum! You are not Tom Hanks alone on an island trying to survive by talking to a volleyball. You are Kid, a self motivated, go getter with a fierce determination to succeed, so go find your crew!

"Jessica Sitomer's book reminds me of the old adage: 'Give a man a fish and he'll eat for a day. Teach him to fish and he'll eat for a lifetime.' There is no shortage of books on bookshelves in bookstores offering up the Hollywood hopeful a fish (or in most cases, something fishy). Sitomer provides a strategy on how to create a career so you will work (and eat!) for a lifetime."
-Andrew Kreisberg, Executive Producer, Arrow, Writer, Boston Legal, The Simpsons

"Jessica with AND.ACTION! has created a productive and effective way of not only guiding the reader through a method of setting attainable goals but also providing for them an enjoyable process in the journey of self discovery."
-Ana Lucia Cottone, Television Programming Executive

"Thinking outside the box and nurturing relationships is the key to being a successful actor. Jessica Sitomer's AND.ACTION! will teach you how to do this. The same career building tools she shares here will also help you balance your life when you get to wear many hats in this field. Run to get this book!"
-Diane Farr, Actress, Numb3rs, Author, The Girl Code